BBC’s Mark Lowen interviews a group of young rebel soldiers of the Nuer tribe who used to steal cows. He listens to their stories about wanting to fight the South Sudanese government led by a Dinka, Salva Kiir. 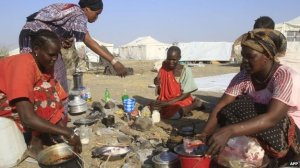 The United Nations reports that with the current  fighting between the Dinka and Nuer tribes the country is experiencing “an acute need for food.”